The year 2022 was marked by the emergence of longer-term economic repercussions of the COVID-19 pandemic and an unexpected war in Eastern Europe that caused turmoil in energy markets. Despite efforts to continue stimulating the US economy in the wake of the pandemic, high inflation put a damper on economic growth, which was exacerbated by a spike in oil prices as a result of Russia’s invasion of Ukraine. Consequently, the US economy grew 1.9% in 2022, down from a 5.7% GDP increase in 2021.

Based on preliminary economic activity and energy data, Rhodium Group estimates that greenhouse gas (GHG) emissions in the US slightly increased in 2022, rising 1.3% compared to the previous year. While this is the second year in a row that emissions have increased, it nonetheless marks a change from 2021, when emissions rebounded faster than the economic growth rate. This reversal in 2022 was largely due to the substitution of coal with natural gas—a less carbon-intensive fuel—and a rise in renewable energy generation.

Economic and energy market turmoil in 2022

The year 2022 was characterized by economic challenges and uncertainty, with inflation emerging as a key source of concern for the US economy. The rising prices of goods and services, initially caused by the disruption of the COVID-19 pandemic on global supply chains, were further exacerbated by a spike in oil prices due to Russia’s invasion of Ukraine. Natural gas prices were also up in 2022 relative to 2021, owing to increased demand for gas from Europe due to reductions in Russian gas supply, as well as a colder-than-normal first quarter in the US. As actions to mitigate inflation were put in place, the outlook for US GDP growth dimmed considerably over the past year, with the consensus now forecasting a 1.9% increase in 2022.

Although we won’t have official GDP data for 2022 until September, preliminary activity data suggests that total greenhouse gas (GHG) emissions in the US slightly increased in 2022, rising 1.3% compared to the previous year (Figure 1). Even with the slight increase, this indicates that the GHG intensity of the US economy declined in 2022, a turnaround from the more carbon-intensive rebound experienced in 2021.

Over the past few years, the COVID-19 pandemic has shifted the underlying forces that shape the carbon intensity of the economy. In 2019, the downward trend in coal consumption helped to reduce GHG emissions, despite GDP growth. In 2020, the pandemic had a significant impact on the economy, causing GDP to decline by 5.9% and emissions to drop by 10.6% compared to 2019, the largest decrease in emissions since the 2008 recession. However, in 2021, GHG emissions rebounded faster than economic growth—GHG emissions rose by 6.5%, while GDP rose by 5.9%—primarily due to an increase in coal generation and a modest recovery in transport demand. By contrast, in 2022 GDP growth outpaced the increase in GHG emissions. 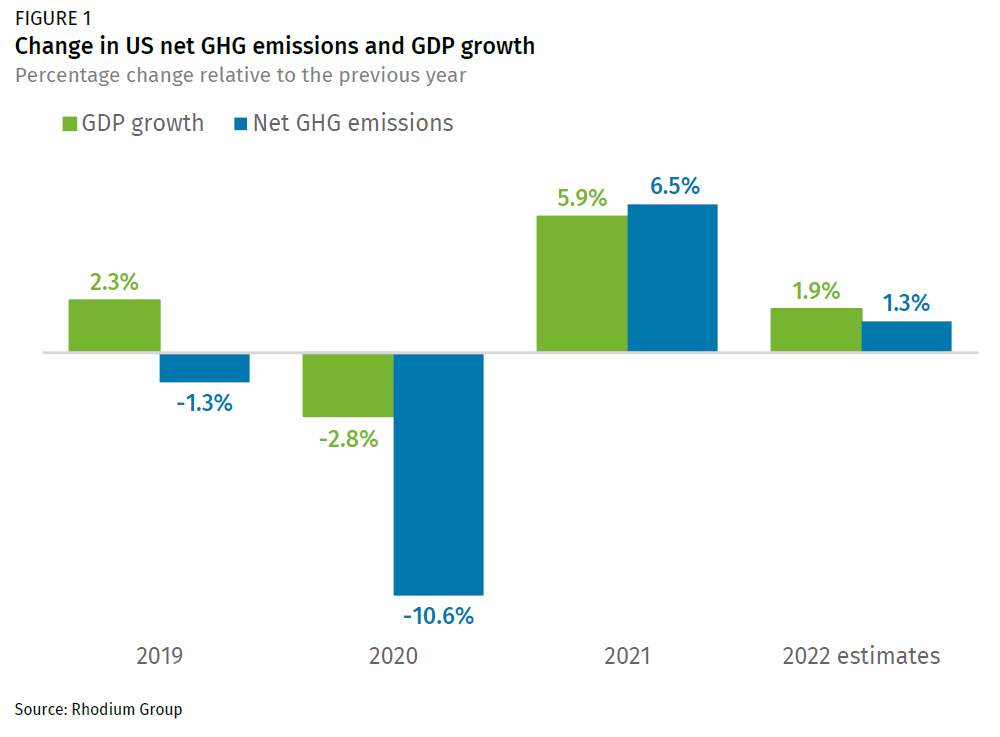 This reversal in 2022 was primarily driven by a drop in emissions from the electric power sector, mostly due to the displacement of coal by natural gas and an increase in renewable energy (Figure 2). Outside of the power sector, emissions increased slightly. The most significant increase was seen in direct emissions from buildings, which rose by 6% and was the only sector to rebound to pre-pandemic levels (Figure 3). This was largely due to increased energy consumption for heating in homes, as 2022 reported below-average winter temperatures. 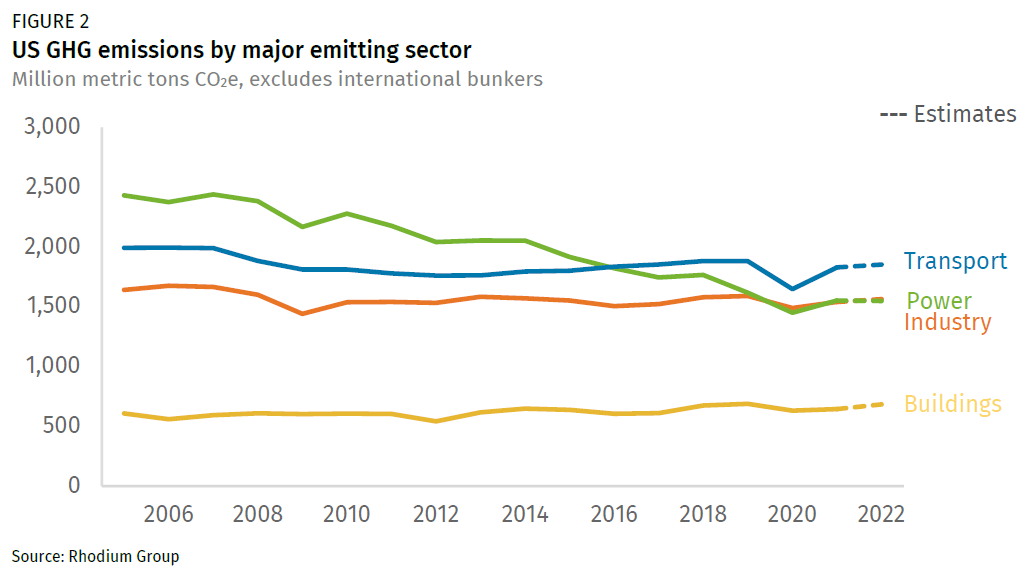 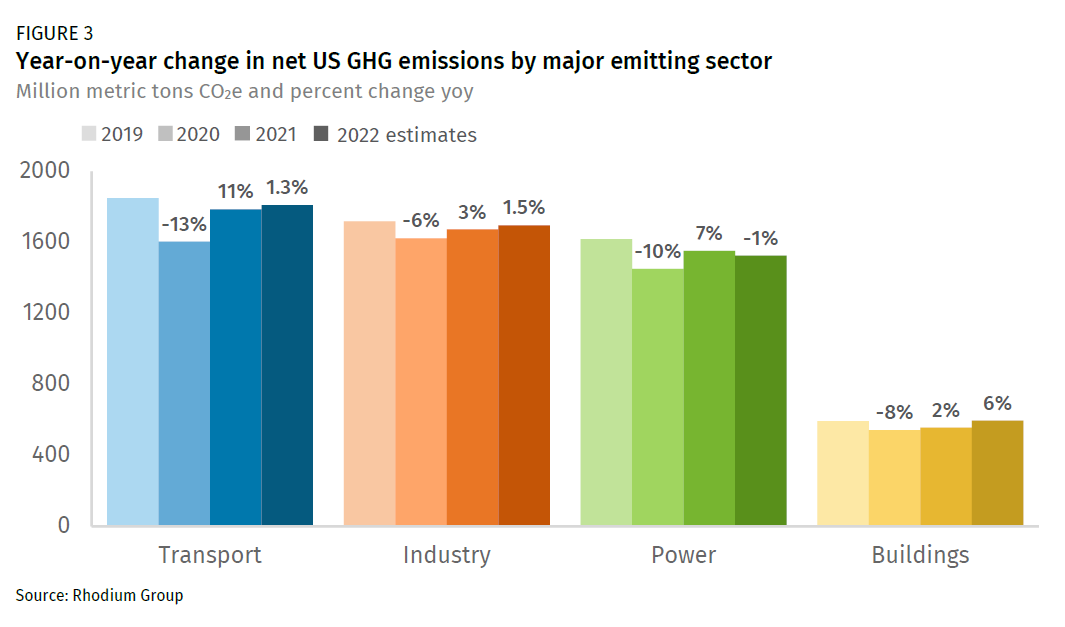 In the electric power sector, which accounts for 28% of overall emissions in the US, emissions decreased by 1% in 2022. Coal generation in the US fell in 2022, returning to the downward trend that had been in place until last year’s modest increase. Based on monthly and daily generation data from EIA, we estimate that coal generation declined by 8% compared with the previous year, with several factors contributing to the drop (Figure 4). Among these was the retirement of coal-fired generators and disruptions to the railroads that deliver coal to power plants, which hindered power plants’ ability to replenish their coal stocks and led to a reduction in coal generation. The EIA also forecasted that these factors contributed to a 19% increase in the price of coal for the power sector relative to 2021. Given these conditions, we anticipate that coal’s contribution to electricity generation will continue its downward trend and reach 20% in 2022, a decrease from the 23% it represented in the previous year (Figure 5).

Renewable energy generation also saw a significant increase, rising by 12% compared to the previous year. For the first time in over sixty years,[1]  renewables surpassed coal in the US generating 22% of total electric power, with coal dropping to only 20%. 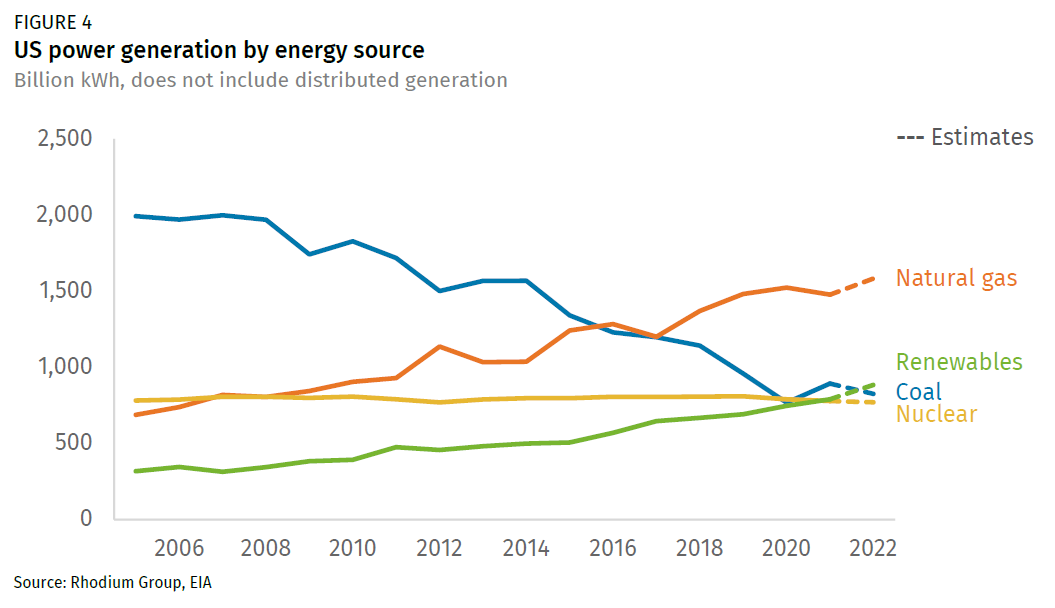 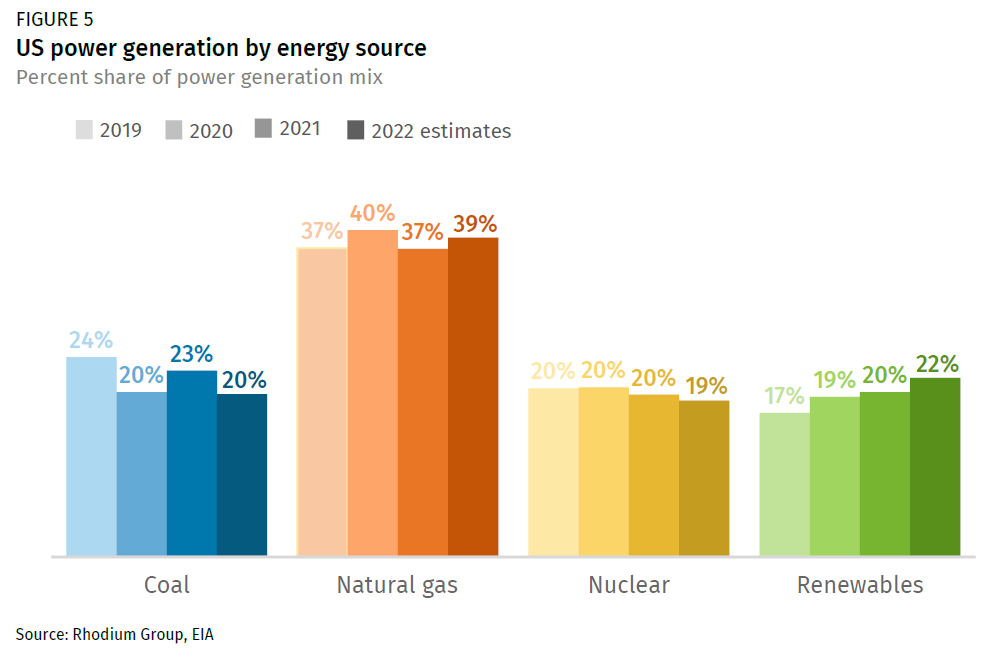 Little change in transportation and industry

Emissions in the transportation and industrial sectors—the two highest-emitting sectors which together account for two-thirds of total US GHG emissions—rose slightly by 1.3% and 1.5%, respectively (Figures 2 and 3).

The changes in industrial and transportation sector emissions reflect the impact of inflationary uncertainty. Industrial production was affected by supply chain turmoil and rising oil prices, leading to higher production and shipping costs. This led to a limited increase in the manufacturing of goods, and emissions in the industrial sector remained mostly unchanged. Meanwhile, in the transportation sector, emissions remained relatively flat due to the impact of rising oil prices on demand. The slight emissions increase in this sector was driven mainly by the demand for jet fuel as air travel increased relative to 2021 (Figure 6). In the first quarter of 2022, fuel demand in the transportation sector, including gasoline, jet fuel, and diesel, rose slightly. However, once the cost of oil began to affect transportation fuel costs, demand remained below 2019 levels for the rest of the year. 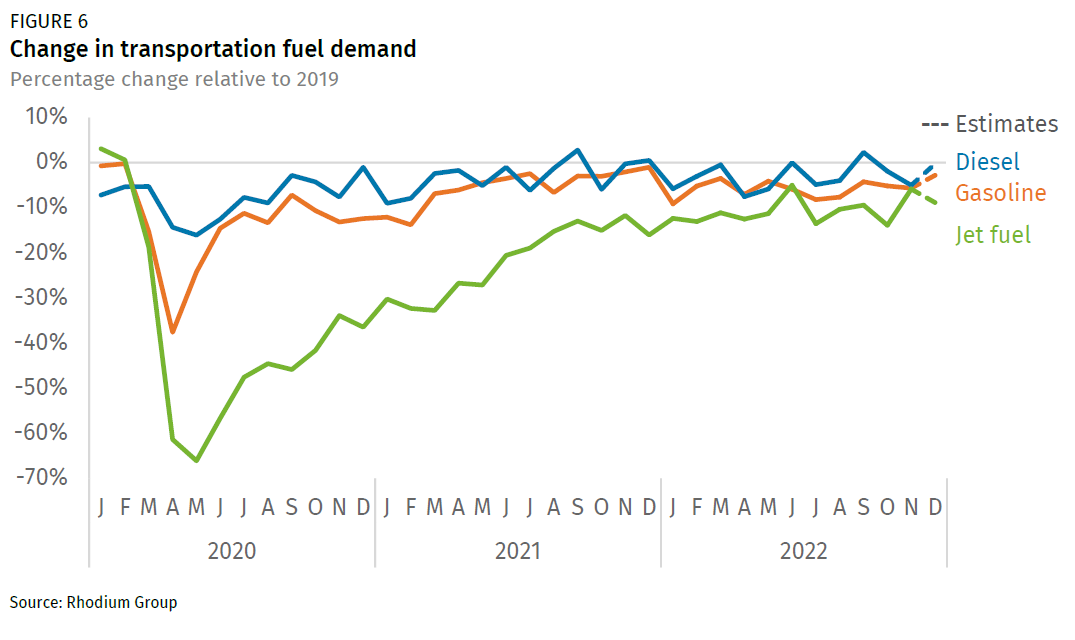 The passage of the Inflation Reduction Act (IRA) by Congress is a significant turning point, and we may start to see its effects on emissions as early as this year if the government can fast-track implementation, with progress expected to accelerate by 2025. However, even with the IRA, more aggressive policies are needed to fully close the gap to 50-52% by 2030. In 2023, federal agencies can close this gap further by proposing aggressive regulations that drive down emissions. These actions, together with additional policies from leading states as well as action from private actors, can put the target within reach—but all parties must act quickly. 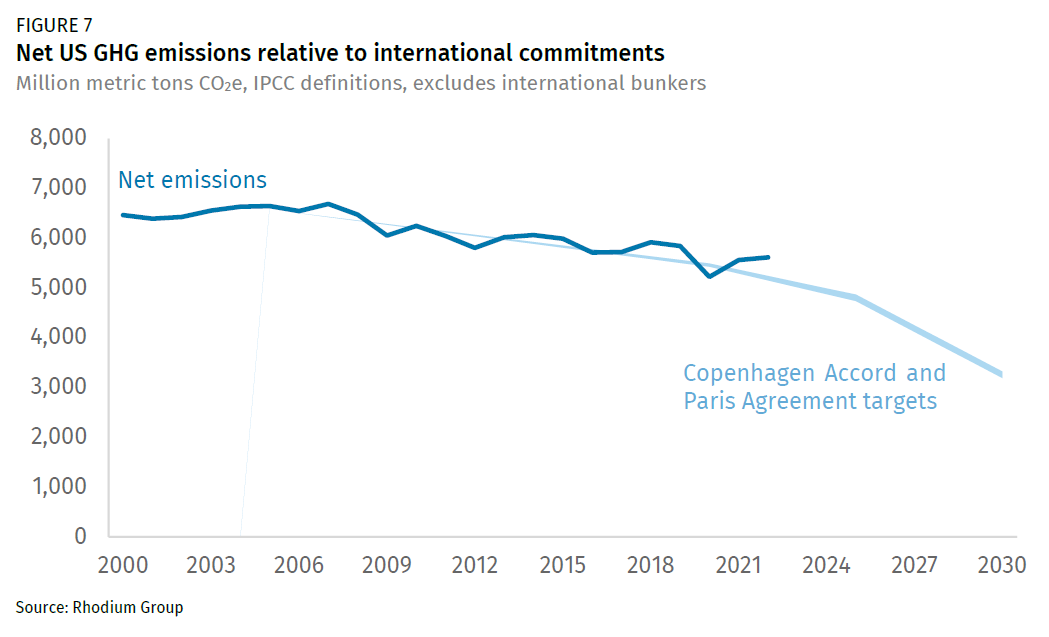 [1] Prior to the 1960s, hydropower exceeded coal generation.