A Step Closer to a Rollback of Fuel Economy Standards

In the coming weeks, the Trump administration may release its final rule regulating fuel economy standards for cars and light trucks. The rule, called Safer Affordable Fuel-Efficient (SAFE) Vehicles, is expected to require automakers to increase average fuel efficiency by 1.5% annually from model year 2021 to 2026. It will roll back the Obama-era standards, which would have required a roughly 5% annual increase. The difference between these standards in terms of both greenhouse gas (GHG) emissions abatement and costs to drivers is significant. Relative to Obama-era rules, we estimate that the 1.5% proposal would boost US oil demand by 2.2 billion barrels from 2021 to 2035, increasing spending on fuel for drivers by $231 billion over the same timeframe. And it would reduce GHG emissions by only about one-fifth of what we would expect under the Obama-era standards.

The Fight Over Fuel Economy Standards

In August 2018, the Trump administration announced that it would freeze the Obama-era Corporate Average Fuel Economy (CAFE) standards at 2020 levels through model year 2026. It also announced that it would revoke the ability of California to set its own more stringent fuel economy standards, which 13 other states have subsequentally adopted. Our previous analysis of this decision indicated that it could be one of the biggest environmental rollbacks of the Trump era.

This decision split the auto industry and kicked off a legal fight with California and 22 other states suing the Trump administration. In recent weeks, the Trump administration has indicated willingness to back off of a complete freeze. In January, the National Highway Traffic Safety Administration (NHTSA) and Environmental Protection Agency (EPA) submitted proposed rules for model years 2021 through 2026 to the White House Office of Management and Budget. The rule is still under review and could change before being released, but it is expected to require a 1.5% annual increase in fuel efficiency from 2021 to 2026 instead of a complete freeze.

In this note, we assess the impact of a 1.5% annual fuel efficiency increase on US oil demand, driver costs, and GHG emissions relative to the Trump administration’s originally proposed freeze, and compare that with the impact we would expect under Obama-era standards.

The Impact on Oil Demand and Driver Costs

To see how Trump’s expected new rule stacks up, we revisit our estimated impact of his earlier proposal to freeze Obama-era fuel economy standards. We model impacts under oil prices of around $70 a barrel West Texas Intermediate Crude Oil Prices (WTI), consistent with our Taking Stock 2019 central oil price scenario. This assumes, in 2018 dollars, a moderate price path between today’s prices of around $50 a barrel to the past decade’s high of nearly $100 a barrel. 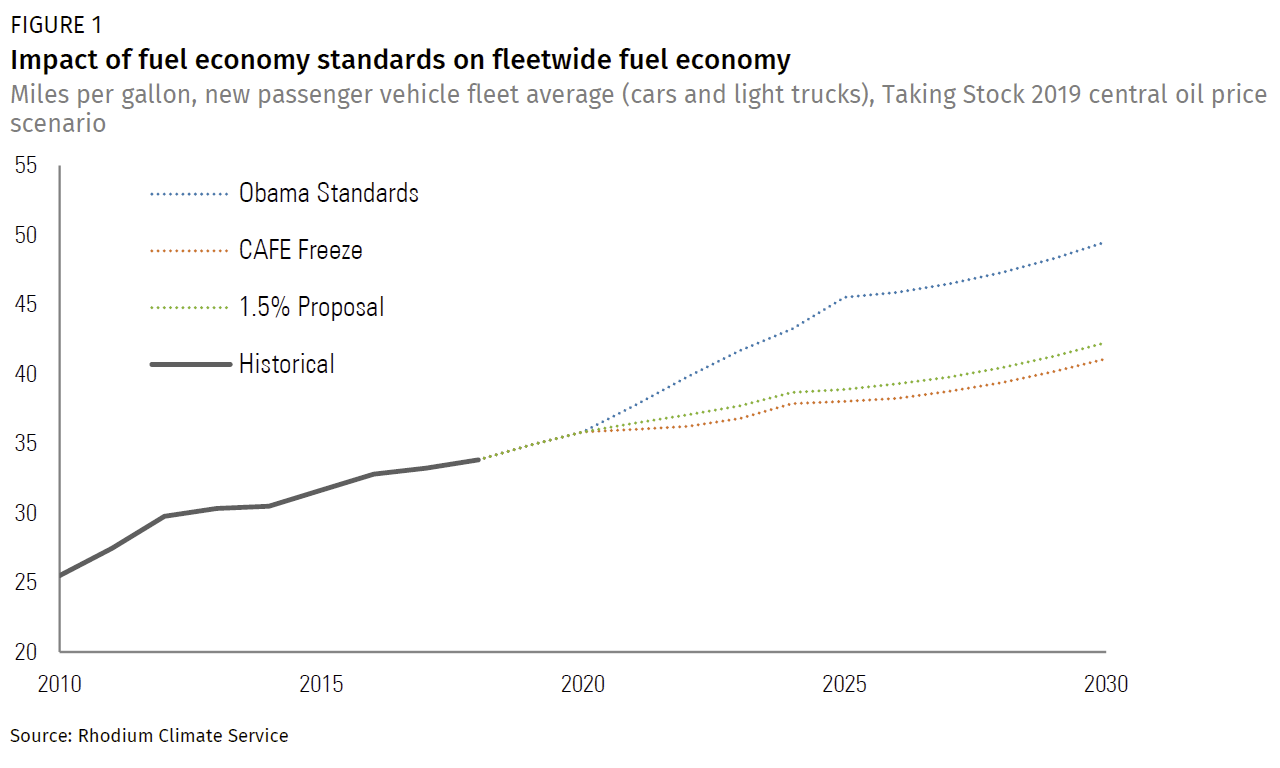 The Obama-era standards would reduce US oil consumption by 237 million barrels cumulatively from 2021 to 2025 relative to a CAFE freeze, rising to 2.2 billion barrels by 2035. The 1.5% rule would reduce demand, but only slightly, with Americans consuming an additional 184 million barrels of oil by 2025 compared to Obama-era standards. The gap between the two standards rises to 1.8 billion barrels by 2035, as more of the vehicle fleet has been sold under the weaker rules (Figure 2). Purchasing this oil would cost drivers an additional $231 billion cumulatively in the same timeframe. 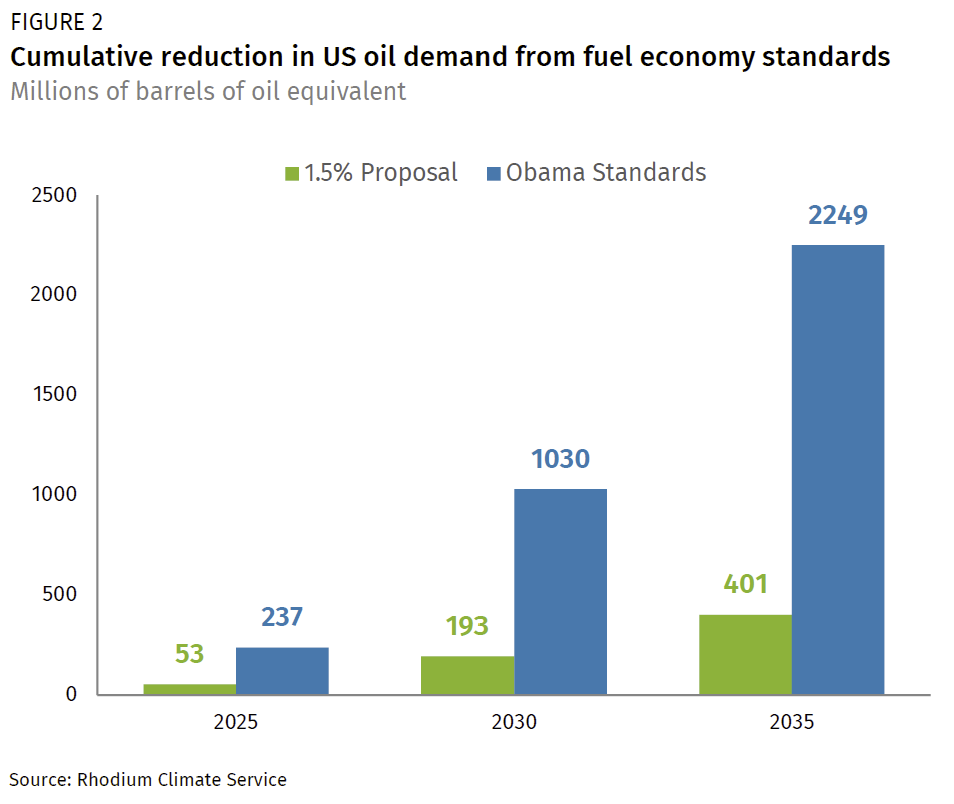 The Impact on Greenhouse Gas Emissions

We estimate the 1.5% proposal could reduce transportation-related GHG emissions by 19 million metric tons (MMTs) cumulatively from 2021 to 2025 relative to freezing CAFE standards, growing to 143 MMTs by 2035. This is about a fifth of the cumulative emissions abatement we would expect under the Obama-era standards (Figure 3). This difference is significant, representing an increase in cumulative emissions larger than the annual economy-wide emissions of more than 77% of countries on earth. 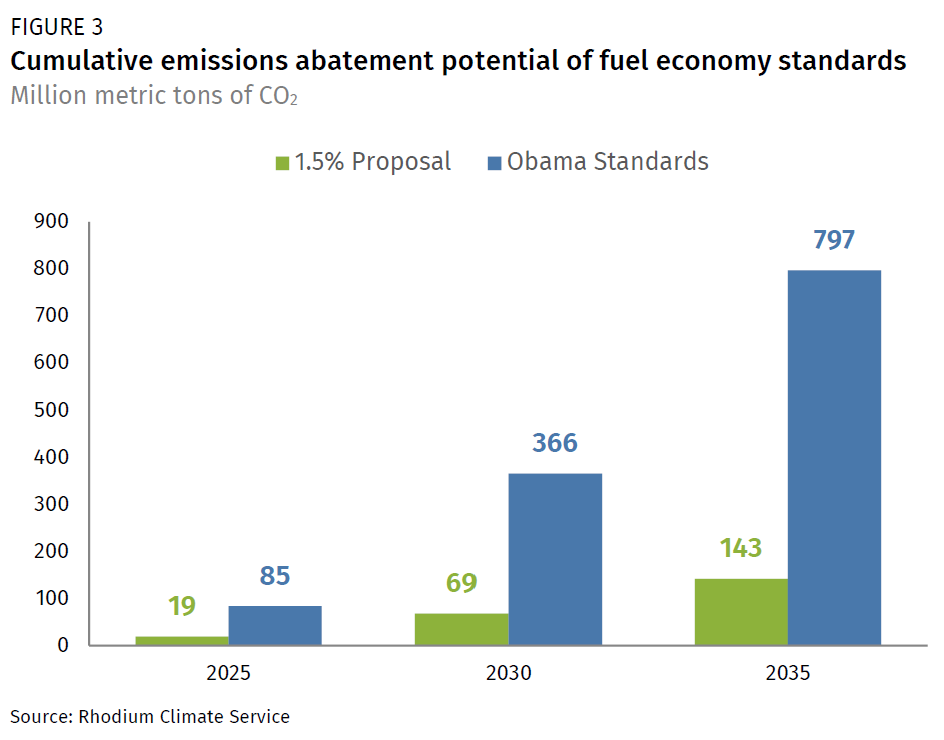 In our recent estimates of US greenhouse gas emissions for 2019, we found that the transportation sector maintained its position as the biggest source of GHG emissions in the US. More than two-thirds of transportation sector emissions come from cars and light trucks, and fuel economy standards are the primary federal policy on the books to address them. If the Trump administration does succeed in weakening standards, it would be a meaningful setback to the US’s ability to tackle this challenging sector and meet long-term emissions reduction goals.