States Pave the Way for a Zero-Emission Vehicle Future

In this note, we analyze two landmark California transportation policies—voluntary agreements with five automakers to implement more stringent annual light-duty vehicle greenhouse gas (GHG) improvements, and a recent 15-state agreement to accelerate medium and heavy-duty vehicle electrification. We estimate that expanding these two state-led transportation policies nationally—whether through sub-national coordination or eventual federal action—has the potential to reduce annual US transportation GHG emissions by 9% in 2035 and 23% in 2045, relative to baseline emissions in each year. In terms of cumulative emissions, from 2021 to 2045, federal expansion of the five automaker deals and 15-state agreement could reduce GHG emissions by 2.2 to 2.3 gigatons (billion metric tons)—more than the annual GHG emissions of Japan, Germany, and the UK combined.

Transportation is the leading source of US emissions

Because of the sharp decline in personal vehicle use and air travel during the pandemic, we expect to see a significant drop in total transportation emissions in 2020 and 2021 (approximately 22% to 32% below 2019 levels). There is likely to be lasting effect through 2030, with emissions remaining 1 to 14% below the pre-COVID baseline in 2030. The extent to which emissions might rebound after COVID-19 will depend on the pace and shape of economic recovery. However, the sharp short-term drop in emissions falls far short of the scale of reductions needed to put the US on track for deep decarbonization and net-zero emissions by mid-century. Any COVID-related emission reductions would largely be the result of decreased economic activity. To meet mid-century decarbonization goals, the US will need to accelerate lasting structural changes, including transitioning to zero-emission vehicles. 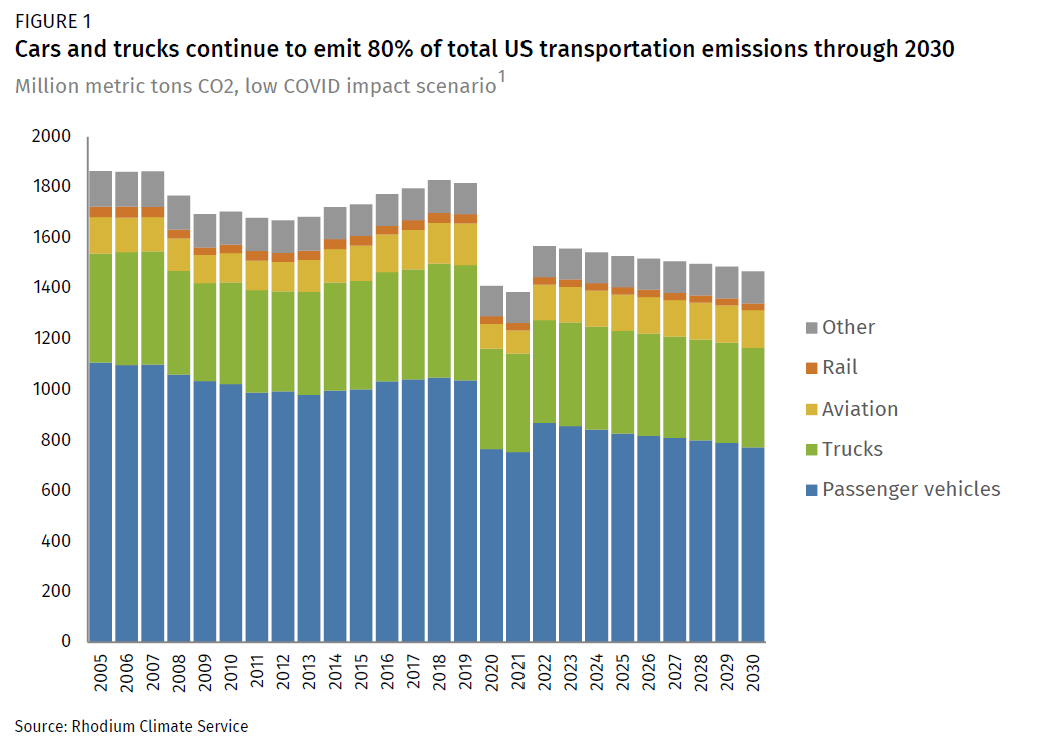 To date, progress in climate policy has been driven almost entirely by states. As federal policymakers assess options for decarbonizing transportation in the years ahead, state policies provide a useful starting point. In this note, we focus on two state-led policies that target the largest sources of emissions in the transportation sector: light-duty vehicles, and medium and heavy-duty vehicles.

Although the Trump administration has rolled back federal GHG standards and threatened California’s ability to set its own standards, California and its coalition of leadership states have redoubled their efforts. California recently made headlines by expanding its coalition to include five major automakers as well.

In defiance of the Trump administration’s rollback of the Obama-era Corporate Average Fuel Economy (CAFE) standards, California reached voluntary agreements with five of the world’s largest automakers to increase annual fleet GHG standards nationwide. Under the agreement, Volvo, Ford, Honda, BMW, and Volkswagen will increase efficiency for light-duty vehicles by 3.7% annually through 2026, short of the roughly 5% annual improvements anticipated under the Obama-era standards, but more stringent than the 1.5% annual increase required federally under the Trump administration’s replacement standards, the Safer Affordable Fuel Efficient (SAFE) rule.

In February, we assessed the SAFE rule and found that it results in about one-fifth of the cumulative emissions abatement estimated under the Obama-era CAFE standards. This difference is significant, representing an increase in cumulative emissions through 2035 that is greater than the annual economy-wide emissions of more than 77% of countries on Earth.

We estimate that the current deal with the five automakers will result in cumulative emission reductions of 136 to 148 MMT CO2 by 2035, relative to the baseline of a nationwide SAFE rule (Figure 2). These reductions are double what we’d expect under the SAFE rule by itself, but still a far cry from the abatement expected under the original California/Obama standards, which the SAFE rule replaced. In terms of annual emissions, we find that California’s agreements with the five automakers will reduce US transportation emissions in 2035 by 1% (19 MMT), relative to the SAFE rule baseline.

Expanding California’s automaker deals to include a broader swath of the light-duty auto industry could help narrow the gap. To understand the full potential of this approach, we assessed the emissions impact if all automakers were to follow the GHG standards of the five automaker deals. Nationwide deals with all automakers would result in cumulative emission reductions of 451 to 489 MMT CO2 by 2035, relative to the SAFE rule baseline. National expansion of the automaker deals represents a three-fold increase in reductions from the current California deals with the five automakers. In terms of annual emission reductions, a national expansion represents a 4% reduction (63 MMT) in total US transportation emissions in 2035, and a 5% reduction (81 MMT) in 2045, relative to the SAFE rule baseline. 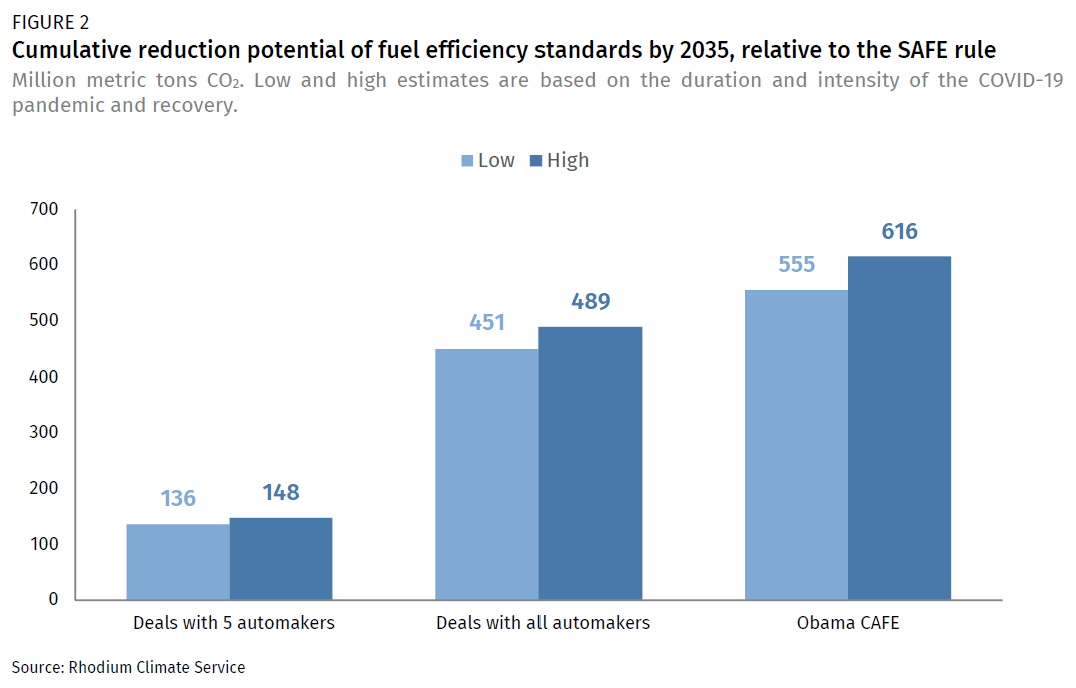 We estimate the impact of the MOU, relative to our Taking Stock baseline, would reduce US oil demand by 138 to 144 million barrels cumulatively by 2035, depending on the pace of future economic recovery (Figure 3). Its impact grows substantially over time as the stock of medium and heavy-duty trucks turns over, resulting in a cumulative reduction of 709 to 740 million barrels by 2045.

If the MOU were expanded nationally, the impact would increase six-fold. By 2035, cumulative oil demand would fall by 806 to 843 million barrels, expanding to 4.6 to 4.9 billion barrels by 2045. The long-term effect of expanding California’s approach nationally would reduce oil consumption in 2045 by 16 to 17%. 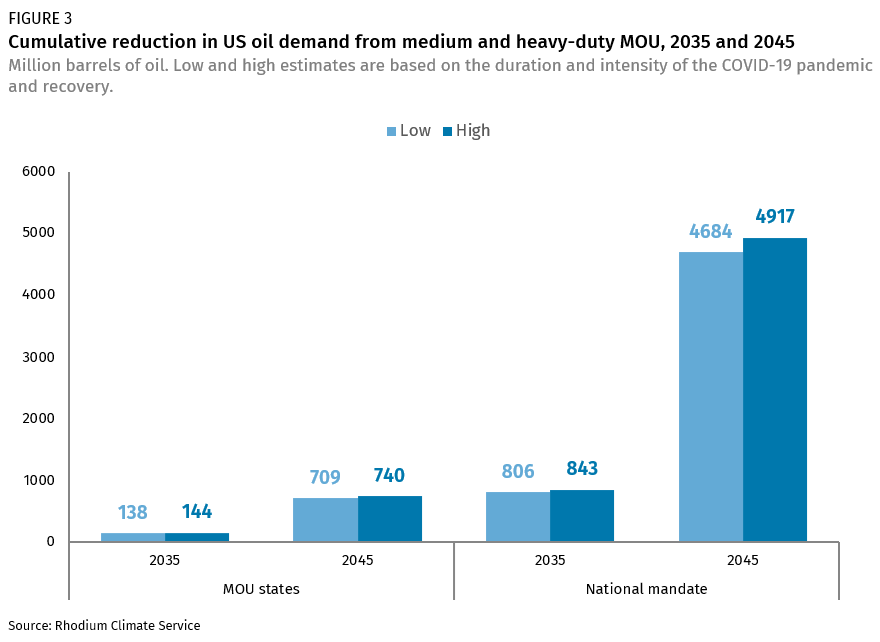 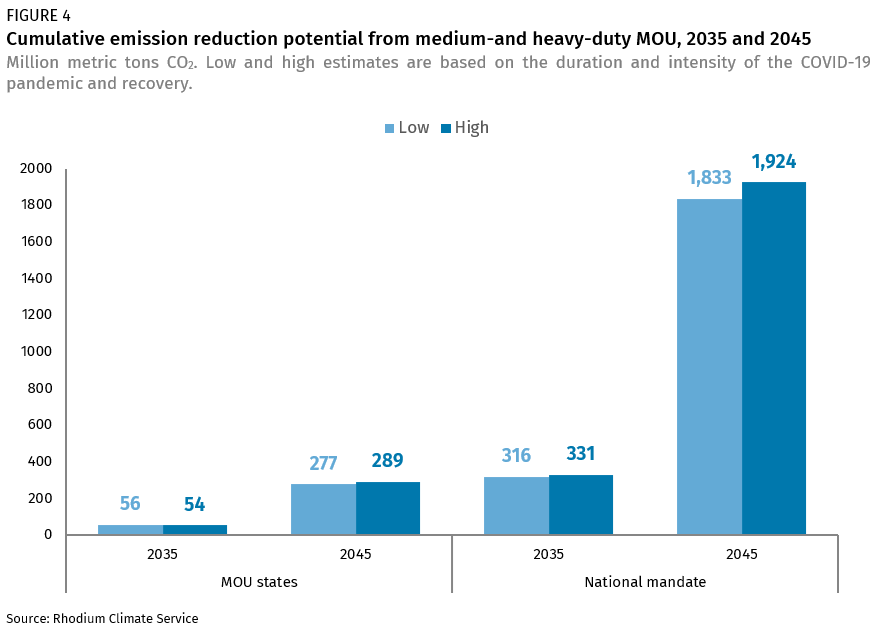 Electrifying the entire fleet of medium and heavy-duty vehicles across the nation has ramifications far beyond the transportation sector. Achieving 100% zero-emission new medium and heavy-duty vehicle sales by 2050 will increase US electricity demand by 16% (when compared to our Taking Stock baseline). If this increase in generation is filled through zero-emission renewable electricity, there will be no net increase in emissions. But if the electricity is supplied through the current US electric power mix, a significant portion of the cumulative emissions benefit from zero-emission vehicles will be eroded. While it is very unlikely that significant transportation electrification would occur in the absence of parallel decarbonization of the US electricity grid, it is important to consider the comprehensive impacts of policies across the US economy.

November: a fork in the road?

Regardless of the election results in November, states will continue to play a vital role in driving policies that could put the US on track for net-zero emissions by mid-century. On the light-duty side, state-led GHG standards deals with all automakers could result in a reduction in annual emissions by 4% in 2035 and 5% in 2045, relative to a SAFE rule baseline. State coordination could also reduce annual medium and heavy-duty vehicle emissions by 5% in 2035 and 18% in 2045, driving transformation in a stagnant emissions sector.

Even with a second Trump administration, states, cities, and corporations will be vital in driving climate ambition and in coordinating efforts for systemic changes in the transportation sector. In a Democratic administration, officials will look to states, cities, and corporations for examples of shovel-ready climate policies with demonstrated success. And if history is any indication, even ambitious federal climate policy agendas require strong state leadership and coordination. California and other leadership states have a proven track record for implementing transportation policies and can serve as an example of how state action can drive larger climate ambition.