It’s been more than eight months since the US House of Representatives passed a comprehensive package of climate change investments as part of its Build Back Better Act (BBBA), which then stalled in the Senate. Yesterday, Senate Majority Leader Chuck Schumer and Senate Energy and Natural Resources Chair Joe Manchin announced a compromise agreement and a path forward. The new Senate package includes a suite of clean energy tax credits for commercial and emerging clean technologies as well as other key emissions reduction investments.

In this note, we provide a preliminary assessment of the Senate agreement, the Inflation Reduction Act (IRA) of 2022, and its implications for the US’s 2030 target of reducing emissions by 50-52% below 2005 levels. Last fall, Rhodium Group published Pathways to Paris, a comprehensive assessment of a portfolio of policy actions that can help the US achieve its 2030 target. In that report, we found that joint action consisting of the climate measures in the BBBA, plus additional federal regulations and other activities across all levels of government, can put the 2030 target within reach. In a recent progress update, we found that congressional measures along the lines of what was in the BBBA represent some of the highest potential emission reductions across all components of a joint action scenario.

Our preliminary assessment of the new Senate package in this note is based off of our newly updated emissions projections under current policy in Taking Stock 2022 and is informed by the broad components of congressional action that we considered in Pathways to Paris. Our preliminary estimate is that the IRA can cut US net greenhouse gas emissions down to 31% to 44% below 2005 levels in 2030—with a central estimate of 40% below 2005 levels—compared to 24% to 35% under current policy. The range reflects uncertainty around future fossil fuel prices, economic growth, and technology costs. It will also meaningfully reduce consumer energy costs and bolster US energy security over the medium-term, and it picks up where the Infrastructure Investment and Jobs Act (IIJA) left off in supporting the widespread commercial deployment of emerging clean technologies. While more action across other levels of government will be required to cut emissions by 50-52% below 2005 levels, the Senate package represents an important and historic step forward.

A long-awaited Senate deal on climate and clean energy investments

Following the passage of the BBBA in the House last fall, all eyes shifted to the Senate, where talks fell apart. Yesterday, Senate Majority Leader Chuck Schumer (D-NY) and Senator Joe Manchin (D-WV) announced a deal that includes important climate and energy security provisions, plus it requires the offering of specific public lands tracts for fossil fuel development for lease, increases royalty rates, and ties future public land access for clean energy to additional fossil fuel lease sales. The array of clean energy tax credits has the greatest impact on emissions. Long-term, full value, flexible clean energy tax credits for new clean generation and retention of existing clean generators are roughly in line with the scenarios we examined in prior research. Long-term tax credits for carbon capture, direct air capture, clean hydrogen and clean fuels provide a launch pad for these key technologies to scale and build on the investments of the IIJA hub and demonstration programs. Federal investments have the potential to generate multi-megaton scale natural carbon removal in soils and forests. Long-term electric vehicle (EV) tax credits will accelerate the diversification of passenger vehicles away from their over-reliance on petroleum, though the EV credits included in this bill are scaled back from previous proposals. Manufacturing tax credits and investments will help diversify supply chains, expand domestic capacity to produce the clean technologies the world needs to achieve deep decarbonization, and can help enable the record levels of wind and solar deployment we project in our modeling.

There are a few notable departures from the House-passed bill, key among them changes to public lands fossil fuel policy. The IRA increases oil and gas royalty and rental rates and increases the minimum bid in onshore lease auctions. It also requires four lease sales by the end of 2022 that were previously included in the 2017-2022 Outer Continental Shelf Oil and Gas Leasing Program, and it implements timing and annual acreage minimums for onshore and offshore oil and gas lease sales as prerequisites for federal renewable leasing and right-of-way issuance. From an emissions perspective, increases in royalty rates put downward pressure on future emissions from oil and gas production. Meanwhile, expanded leasing may put upward pressure on emissions depending on how much private land production (where currently roughly 80% of US oil and gas production occurs) is displaced. At the same time, it’s worth keeping in mind that only a fraction of public land acreage put up for sale actually gets purchased, and only a fraction of sold leases actually get developed. In addition, the minimum acreage requirements—the lesser of 2 million acres or 50% of nominated acreage onshore, 60 million acres offshore—are within historical trends for onshore and offshore lease offerings. We incorporate these provisions into our preliminary estimates of US emission reductions from the package.

Another key change is that direct pay of most tax credits is now only available for government and nonprofit entities such as rural cooperatives, or for a limited time for all actors using select emerging technology and manufacturing tax credits such as the section 45Q tax credit. This is a departure from the BBBA where all market participants could elect for direct pay. However, the IRA also authorizes clean energy project developers to transfer the credits to an unrelated third party that has tax liability and the ability to monetize the credits. Our initial assessment is that transferability may be sufficient to avoid financing bottlenecks that we previously noted could constrain clean energy deployment, though it may have implications for the cost of capital these developers face.

Putting the 2030 climate target within reach 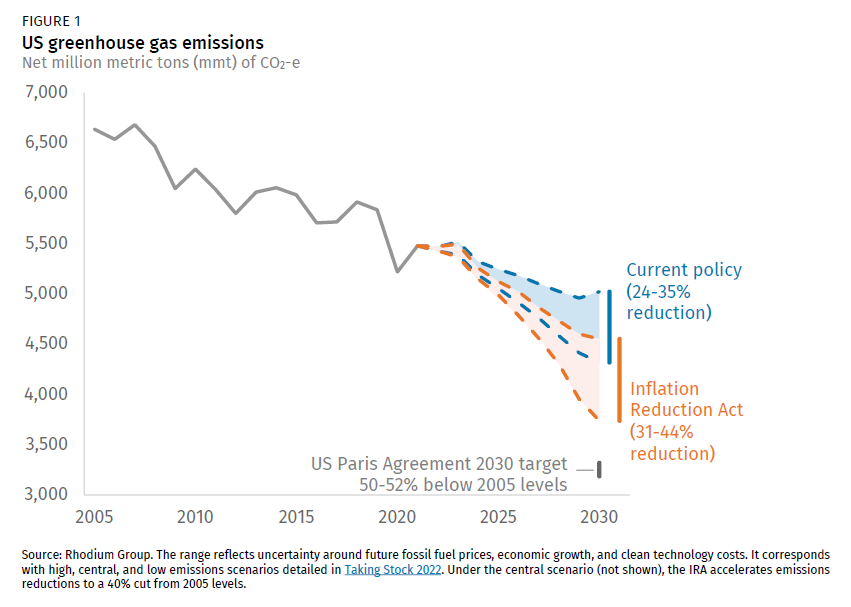 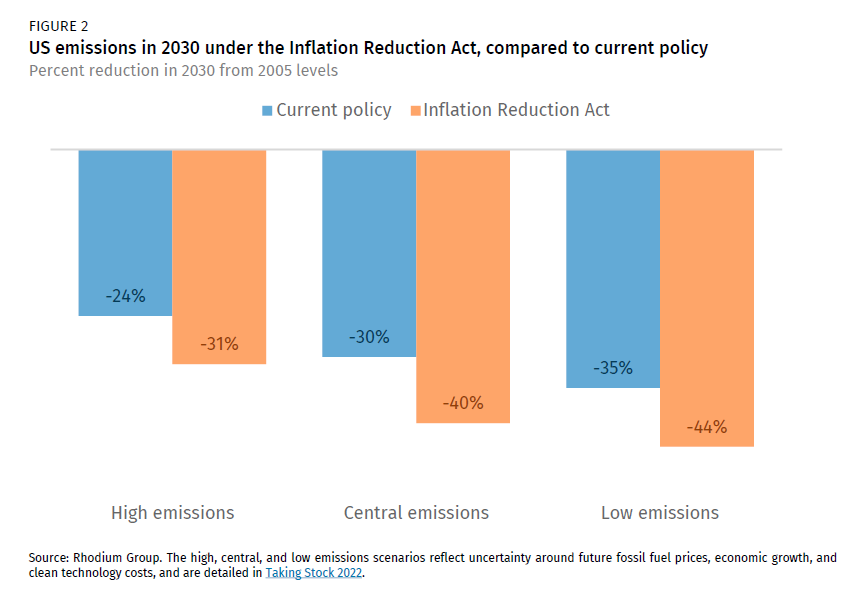 Along with the emissions reduction benefits, the measures in the package appear to have additional benefits. The clean energy investments in the package, combined with improving energy market conditions and technology deployment driven by current policy, can help to reduce household energy costs in the medium-term. These costs—residential electricity bills, bills for home heating fuels like natural gas or fuel oil, and expenditures on transportation fuels like motor gasoline and diesel—decline by $730 to $1,135 in 2030 relative to 2021, driven by a mix of lower fuel prices and electricity rates as well as more efficient energy consumption (Figure 3). The IRA’s contribution to these savings are $16 to $125 per household on average in 2030. 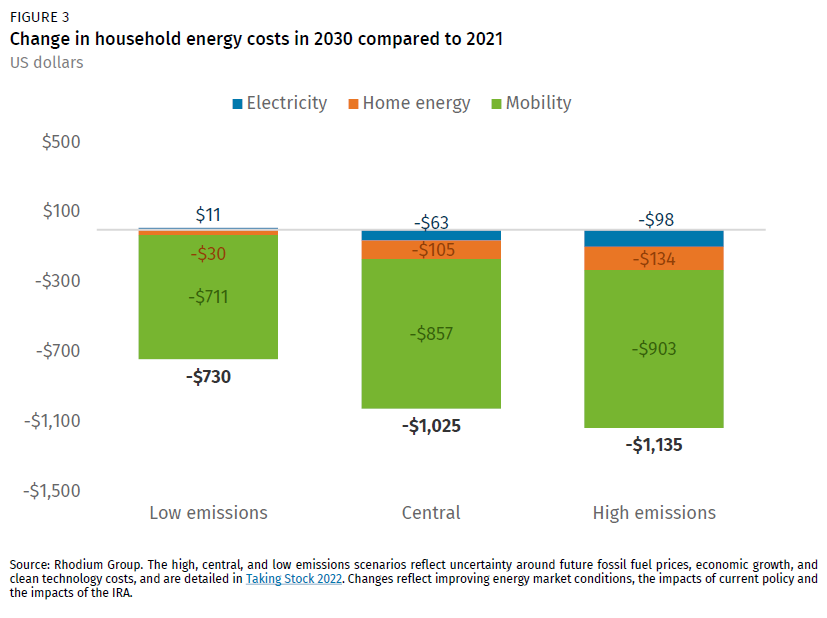 The aggregate impact of the package can also improve US energy security by reducing energy imports and exposure to volatile global fossil fuel prices as well as put the country in a position to better assist allies abroad in providing secure affordable energy. Many of the provisions in the package also help reduce conventional pollutant emissions, which complement programs in the bill explicitly targeted at reducing these pollutants and assisting communities facing unequal environmental effects.

We plan to take a deeper dive into these benefits in future work, as well as continue to refine our modeling of the emissions and energy system outcomes. In the meantime, put simply, the Inflation Reduction Act has the potential to be the biggest climate action ever taken by Congress. However, 2030 is not too far off on the horizon. Swift action in Congress to enact the package, along with additional accelerated action across all levels of government, can help put the US that much closer to its 2030 target of cutting emissions in half.

For more information on our analytical approach, see the Technical Appendix of Taking Stock 2022, linked below.

A Turning Point for US Climate Progress: In-Depth Assessment of the Inflation Reduction Act (August 12, 2022)